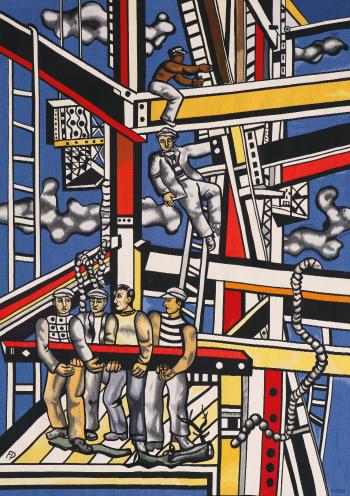 Leger Aubusson Tapestry “Les Constructeurs.” A tapestry from this edition appeared at Sotheby’s in 2013 with an estimate of $150 – 250,000 but failed to sell.

Fernand Leger (French, 1881 – 1955), like Picasso, Braque, Miro and others, was one of the artists who contributed paintings to Marie Cuttoli to be woven in tapestries in the 1920s.

In the 1930s and 1940s Leger continued to work with weavers, notably the Aubusson atelier of Tabard Freres et Soeurs, which is now extinct.  In the 1950s artist Victor Vasarely who had worked with French gallerist Densie René persuaded Leger to join him, Jean Arp, Le Corbusier, Wassily Kandinsky and other artists to join him in creating tapestry editions of their images for the gallery. Leger also worked with René and Jacqueline de la Baume Dürrbach, who wove tapestries for their friend Picasso as part of his arrangement with Nelson Rockefeller.

Leger’s widow, the former Nadia Khodossievitch, a tireless promoter of the artist’s work after his death, commissioned tapestries after Leger’s images working with several notable weavers including Yvette Cauquil-Prince, Suzanne Goubley and various ateliers including Pinton and Tabard Freres et Soeurs.  Many of these tapestries were donated to the Musée National Fernand Leger in Biot, France, which Nadia Leger created with George Bauquier and to other museums.

The Leger estate has remained active in tapestry and has continued to allow re-editions of older tapestries, notably several commissioned by New York gallerist Jane Kahan starting in about 2000 and woven by atelier Pinton. 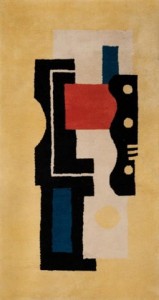 In addition to the images that Marie Cuttoli translated into tapestry, Fernand Leger also was responsible for the primary designs for the rugs — termed “tapis” in French — that Marie Cuttoli sold at her fashionable Paris shop even before she began working with tapestry.  Cosmetic queen Helena Rubinstein was one of Cuttoli’s customers for these tapis.  Decades later in the 1960s Cuttoli created new tapis editions with the collaboration of the Parisien gallery Lucie Weill, which were shown at Galerie Beyeler and also toured American museums.  Such tapis are less expensive than Aubusson tapestries.

There is some controversy regarding market value of these rare items, Buyers would be wise not to rely on a single source regarding pricing. See Buying Tapestries.