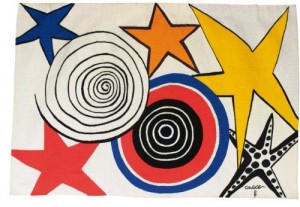 Alexander Calder (American, 1898 – 1976) created over 80 designs that were translated into Aubusson tapestries, making his output among the most prolific by a world-class artist.  The simplicity of his designs made them both artistically stunning and cost-effective to create. 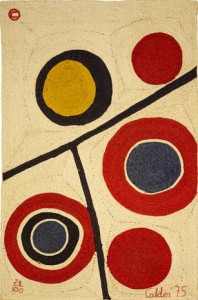 Most Calder tapestries were woven by the Pinton Atelier in Felletin, France, the sister town of Aubusson, in the standard editions of six with two authorized proofs.  Several of these weavings are owned by the Whitney Museum in New York and were featured in the 1976 retrospective of Calder’s work.  They are pictured in “Calder’s Universe” by Jean Lipman, which was produced in conjunction with this show.  Pinton also wove a series of tapestries in larger editions for the United States Bi-centennial in 1976.

People sometimes confuse for Aubussons the wall-hangings that were created after numerous Calder tapestry designs.  Braided by native artisans, not woven, in Guatemala with Maguey Fiber (hemp), these wall hangings were part of the effort to fund relief efforts after a series of earthquakes in Nicaragua.  They are generally editions of 100 and are considerably less expensive than Calder Aubussons with the same titles and similar measurements, which can lead to confusing auction results when lots are mis-catalogued.

ALL CALDER TAPESTRIES ARE NOT CREATED EQUAL, by appraiser and art advisor, Charles Mathes, provides what is perhaps the best overview of the different types of Calder tapestries.