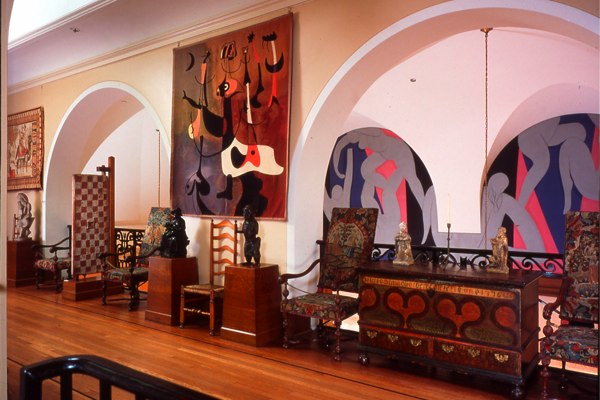 Miro tapesty by Marie Cuttoli in the Barnes Foundation

Pablo Picasso, Joan Miró, Marc Chagall, Alexander Calder, Fernand Leger — these and many other great artists of the 20th centuries were actively involved in having their images translated into tapestry, which is simultaneously the most ancient and the most modern of art forms.

The word “tapestry” once referred exclusively to the rich fabrics that adorned castles and palaces in the Middle Ages. Now, as more and more museums are developing collections of fabric art, the term is just as likely to connote modern master weavings by Frank Stella or Roy Lichtenstein that adorn hotel lobbies and wineries, board rooms and penthouses, vacation homes and condominiums.

In the Renaissance tapestries were considered a more important medium than oil paintings — to adorn the Sistine Chapel Pope Leo X paid Raphael five times what Michaelangelo had received for the ceiling.  Louis XIV recognized that by taking over leadership of tapestry art from the Flemish, France could project its power and its culture as well as increase its wealth.  In the 1662 the  tapestry workshop of the Gobelins was proclaimed a “Manufacture Royale,” followed by Beauvais and Savonnerie.  Originally these factories wove to furnish the royal palace at Versailles, and to this day the Gobelins only weaves gifts of state, not tapestries available for private purchase.  The weavers of Aubusson were granted the title of Manufacture Royale in 1665 and 1689; their output has always been commercially available and is generally considered to be the finest in the world.

Today as contemporary artists like Chuck Close experiment with computer generated fabric images, there are still weavers keeping the painstaking intricate art of weaving alive.  However, the great tapestry revivals of the 20th century produced lasting artifacts that rival and even surpass the beauty, historical importance and impact of the paintings from which they were translated at a cost that can approach 1/100th of the original paintings.